With six years passing since my last computer build, it was time for me to upgrade. After a long consideration of my needs and the options on the market, I built a Hackintosh.

A Hackintosh is a computer, not authorized by Apple, that runs macOS. It’s similar to a normal machine, hardware wise, running Windows or Linux. It just fakes being Apple hardware so that Apple’s operating system can be installed on it.

I’ve also made a video about the process.

Processor: Intel i9 9900k AMD, with the new Ryzen 3000 family of processors, is sending some shivers down Intel’s spine. It seems to do great in both price and performance. Unfortunately, I can’t go the AMD route. Ever since Apple switched to x86 processors, Intel has been their exclusive provider. And it appear it will remain so, until Apple will eventually move to ARM. So, it’s way more safe in installing macOS on it for current and future compatibility. Having a feeling that this is the last Hackintosh I’ll ever build, bracing for aforementioned ARM transition, I got the beefiest consumer processor around.

Cooler: Be Quiet Dark Rock Pro 4 Initially I wanted to try water-cooling the system. After much research, it seems like air cooling is still king when it comes to easiness of install, price, silence and reliability.

Motherboard: Gigabyte Aorus Elite z390 A middle of the road board that’s okay for hackintoshing and supports everything else in my system.

Memory: Skill 2 x 16Gb 3000Mhz DDR4 I think 32Gb are enough for the moment. I do still have two slots empty on the motherboard if I decide to upgrade to 64Gb down the line.

Storage: ADATA XPG SX8200 Pro 1TB NVMEs are pushing flash drives’s speed way beyond SSDs. Even if it’s not a well known brand, it’s highly well reviewed for both speed and reliability. With five to six times increase in performance comparing to normal SSDs, system operations will be blazing fast.

Power supply: EVGA 850W G3 Gold+ Reliable, efficient and with enough head room to support future upgrades. Don’t cheap out on power supplies as they can kill everything else in your build.

Case: Phanteks Elite X Silver A medium sized aluminum case with absolute tons of space to build the system and house all my components. Plus, it looks pretty good.

But why not a Mac?

I debated a lot about going the Hackintoshing route again. Moral, practical and financial arguments can be made for either this or that. I got three main reasons why I decided to build my own computer.

Besides casual browsing, I need my computer for web development and design, photo editing, video editing and gaming.

The current batch of MacBook Pros are hot, have keyboard issues, only powerful to do web development and photo editing. So they cover two out of four needs and the advantage of portability is not that important to me.

When it comes to desktops, iMacs are great computers. I’ve had one since 2007 and my parents are still using it. This was my closest option, but they don’t work for gaming at all.

Lastly the iMac Pros, while more than fit for work purposes, are also not great when it comes to games. They have a very unbalanced set of tradeoffs: extremely powerful, almost overkill, server class Xeon processors and ECC memory, while sporting mediocre AMD graphics cards.

Like I mentioned in the beginning my previous PC was 6 years old. That’s ancient in the tech world. It wasn’t the top of the line when I got it, but with incremental upgrades I’ve been keeping it pretty up to date.

I kept it fresh by taking advantage of the storage speed revolution. Big clunky, unreliable spinning mechanical hard drives were replaced with compact, indestructible and fast flash storage. I got the computer with a 1Tb hard dive but, 3 years down the road, when I upgraded to an SSD it felt like a brand new computer.

Another upgrade I was was able to make, was the graphics card. After four years since building the original system, I got a new card that doubled the performance of the computer.

So, having the ability to keep my computer up to date longer and delaying buying a new one, is a big benefit for both my pocket and the environment.

Even though it’s a big factor, I am placing it third in importance. If there was an Apple computer that would have ticked the checkboxes in my last two points, I would have swallowed the price and got it.

The difference in cost is shocking. Let’s break it down part by part.

Let’s look at storage for the same iMac. The default configuration still comes with spinning disks 2019. Horrible. So one has to upgrade them. Let’s look at the 1Tb storage, what I got as well. That’s a $500 upgrade. Amazon prices the 1Tb Samsung 970 NVMe at $230 (I got the Adata for $160). That’s at least two times more expensive even if equating the included original 2Tb “Fusion” drive as free.

So let’s put one and one together and do some basic math. An iMac, the closest matching my new system specs, would be $4200. That’s around $4350 when you include taxes. I paid $1650 including shipping, duty and taxes.

Sure, the iMac has an awesome in built monitor and peripherals, but with the money difference you have plenty of budget to match them. I didn’t need to spend that money though because I am upgrading. In the long run, Apple hardware is wasteful. You’re forced to discard some perfectly good components because other ones are morally outdated.

Performance wise, this thing is a beast, punching way above its sticker price. Just look at these Geekbench scores and I haven’t even overclocked the system yet. My Hackintosh smokes Apple hardware that’s four to five times more expensive. 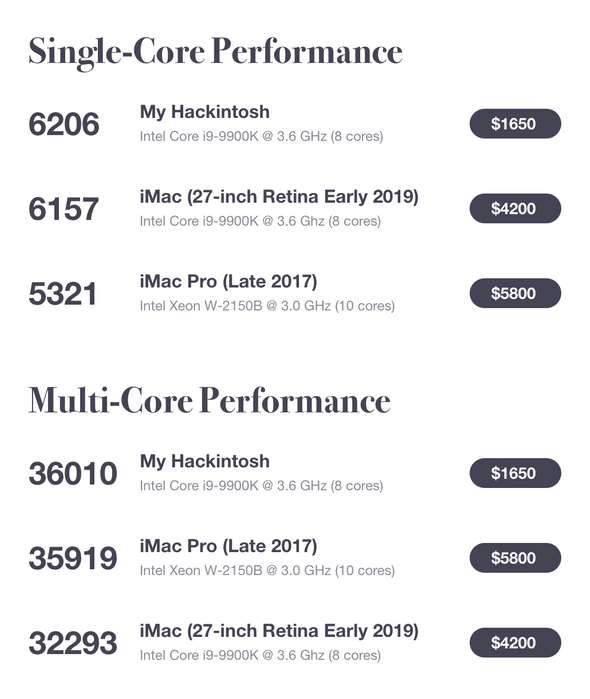 I believe that if one can build a Lego set, one can assemble a computer. It’s not that complicated and there are a ton of guides online that makes the process a breeze.

But it was not all roses. Even though my components were supposed to be supported out of the box, things got messy fast. Remember, macOS doesn’t want to be installed on non-Apple hardware and it shows all the way through the process.

It took four days of trial and error and, not going to lie, plenty of frustration to get the operating system to install. After exhausting every guide that my Google skills could find, I was lucky that a fellow on Reddit came with the eye opening solution.

It was such a relief and I could finally set up everything properly. As a warning, while building the hardware is easy, getting the software to work is not for the feint of heart. If I inspire you to follow my steps, brace yourself with a lot of patience.

I am sorry Apple. You’re not selling what I need. I know what I’ve done is against your wishes and the moral aspect is really putting weight on me. I am a big fan of your products and I’ve been buying plenty of Apple hardware in the past 12 years and will continue to do so. And that should, maybe, make it up somehow.